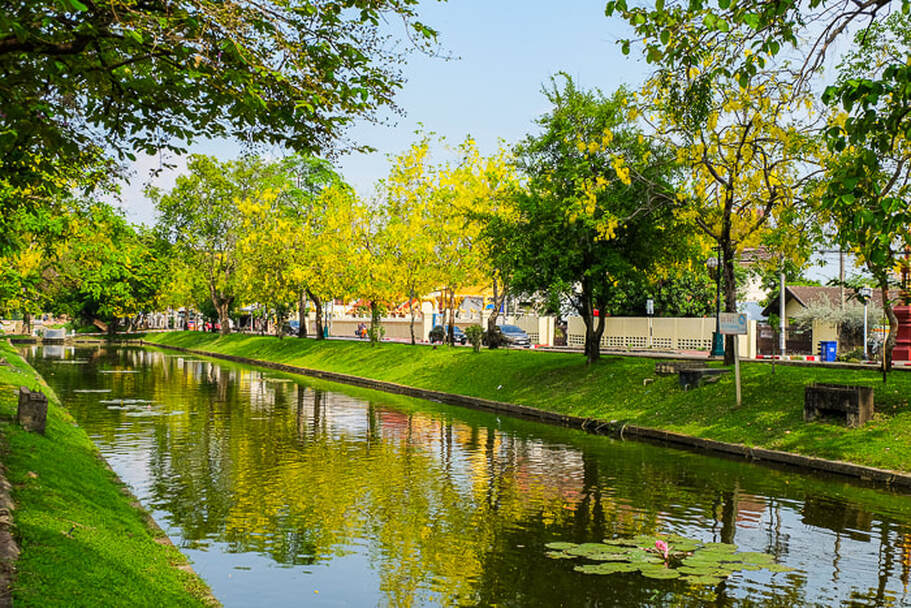 The moat around Chiang Mai's old city
The novel Teak Lord is largely based on historical facts, people and places, so a walk connecting locations mentioned in the story can be the perfect launch pad for anyone who fancies stepping back in time. This half-day stroll from the battlements at the northeast corner of Chiang Mai’s Old City to the grassy expanses of the Gymkhana Club, a colonial institution lost in time, makes for an enjoyable and informative wander through a bygone era. 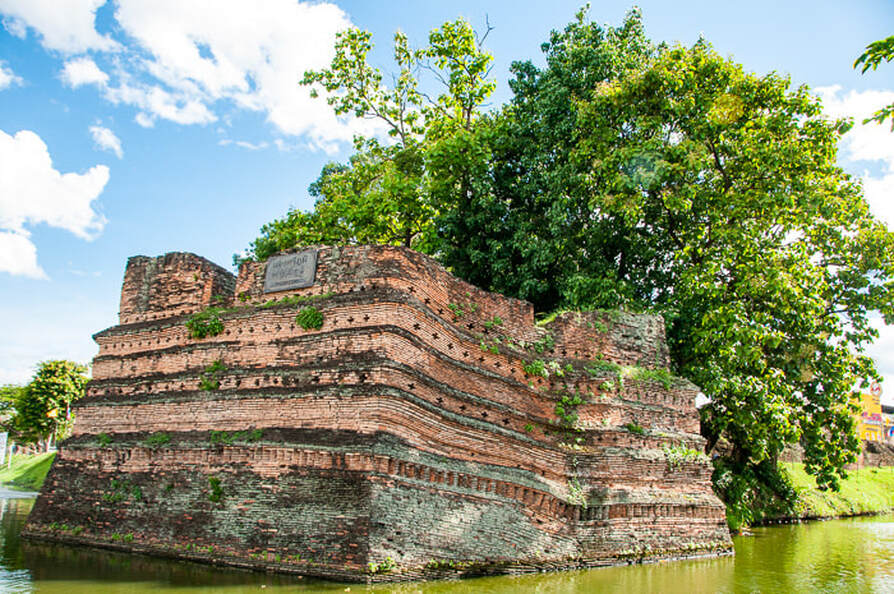 Teak trees in flower behind the warped wall of Sri Phum Corner
The walk begins at Jaeng Sri Phum, the brick bastion in the northeast corner of the Old City. If you stand outside the moat, you can appreciate the wonderfully warped brickwork, which is surmounted by battlements from where the city was once defended.

In Teak Lord (chapter 5, Inside the walled city), though not mentioned by name, this is where Harry Stevens points out teak trees and bo trees to Marion Cheek, and where they witness a ‘trance dance’, as Harry calls it – a wild dance performed by spirit mediums. The trees are still there, and trance dances still occur on rare occasions, usually in the dry season, and are every bit as wild and colourful as in the past. 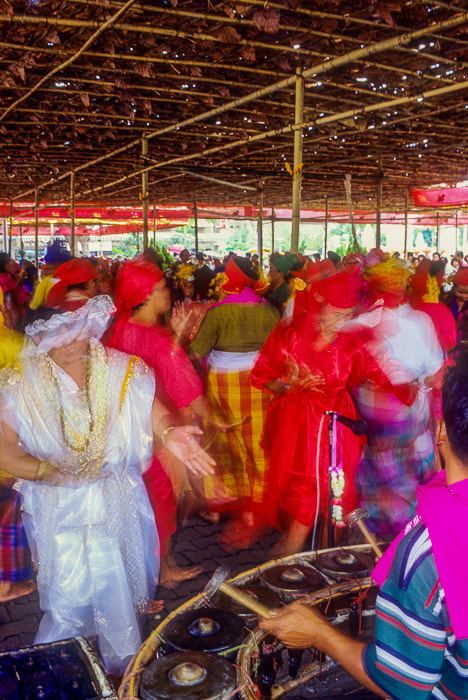 Spirit mediums performing a 'trance dance'
From Sri Phum Corner, head east to the river, passing Talad Muang Mai, the city’s biggest fresh market, then turn right at a white stupa by the river and walk south. Cross the road at the Nakorn Ping Bridge and soon you will see a footbridge across the river from Warorot Market. Go up the steps and over this bridge, the original of which was built by Marion Cheek and was the first sturdy bridge across the Ping River.

The opening of Cheek’s Bridge is recorded in Teak Lord (chapter 47, Spanning the Ping), with a humorous outcome. Though Chao Inthanon, the local ruler, had financed its construction, he was scared to set foot on it, so Cheek had to cross the bridge with elephants to convince him that it was a reliable structure. Finally, the Chao was able to overcome his fear and ran full pelt across the bridge. 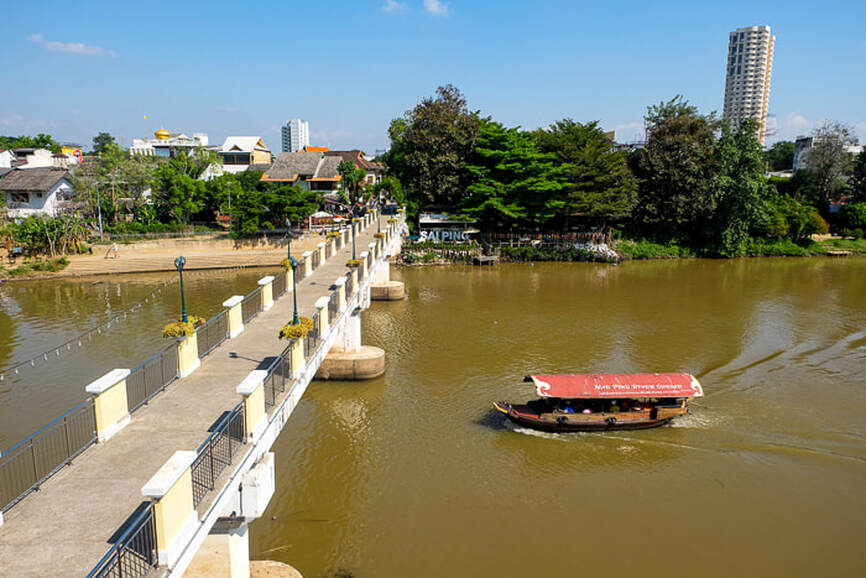 A teak barge passing under the Jansom Bridge on the site of Cheek's Bridge
Cheek’s teak bridge eventually succumbed to a constant bombardment of teak logs floating downstream, and the concrete structure here today is known as the Jansom Bridge.

On the east side of the river, cross the road carefully and step through the small back entrance into Wat Ketkaram (next to a red postbox), which leads to a typical wonderland of a Thai temple compound, with glittering eaves on the assembly hall and fearsome, mythical beasts on the wall of the ordination hall. 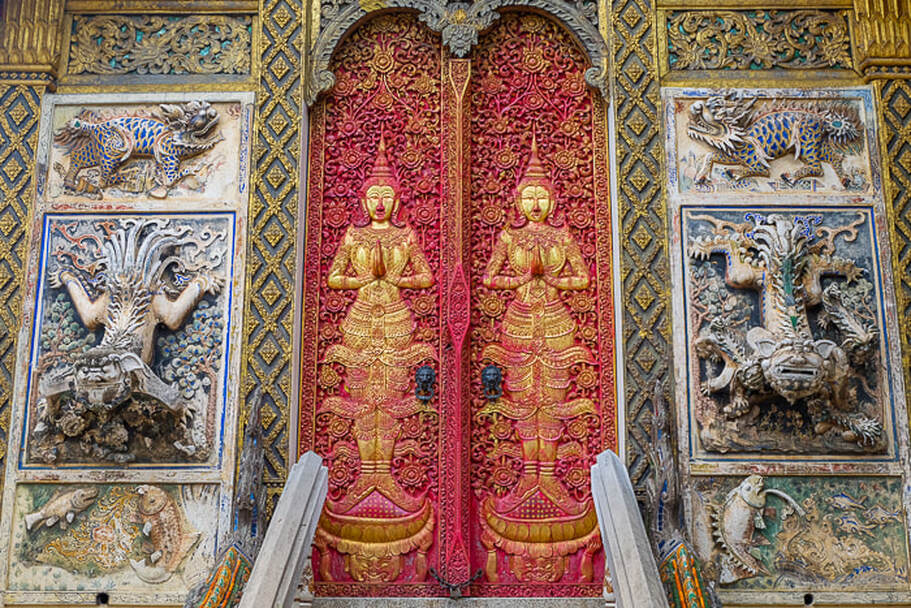 The ubosot (ordination hall) at Wat Ketkaram
Leave the temple by the main (east) gate, turning right and then left to the luxurious, atmospheric 137 Pillars Resort. The centrepiece of this relaxing retreat is a stilted teak house that was the office of the Borneo Company in the days when Louis Leonowens was their Chiang Mai Agent. The partially built house features in Teak Lord (chapter 46, The king of teak), when Leonowens makes a commentary about the race to be the champion teak trader.

Leonowens took over the job of Agent from Marion Cheek, who had been sacked for ‘cooking the books’. Some years later, Leonowens would suffer the same fate and go on to establish his own company, LT Leonowens Ltd, which is still in business today. 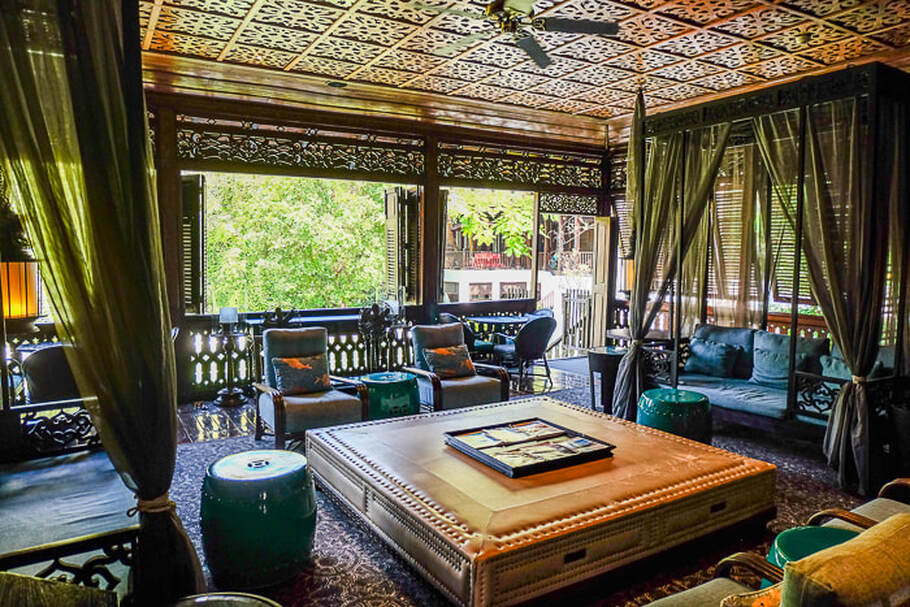 137 Pillars, now a five-star hotel
This is an ideal place for a spot of lunch or an afternoon tea before continuing south on the east side of the Ping River, though there’s another chance for refreshment at the last stop, the Gymkhana Club.

The walk continues past the ample frontage of the First Church of Chiang Mai (though it’s actually the second), which was established by missionary Daniel McGilvary. A key character in Teak Lord, McGilvary is Chiang Mai’s best-known early foreign resident as he was responsible for the building of the city’s first schools and hospitals, though he made few converts to Christianity during his 50 years in the city. 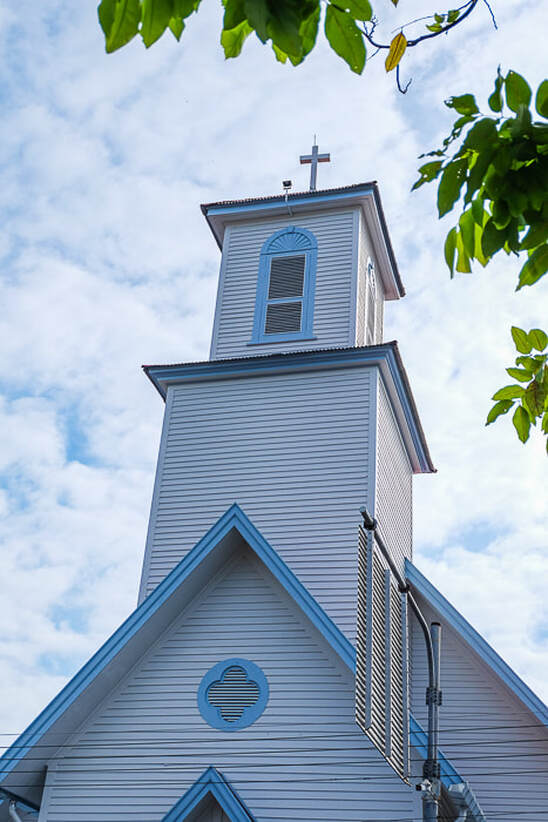 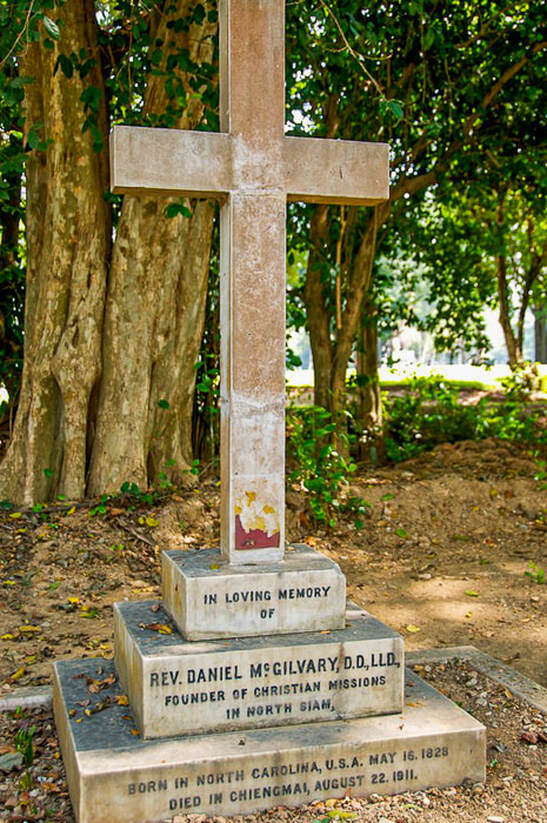 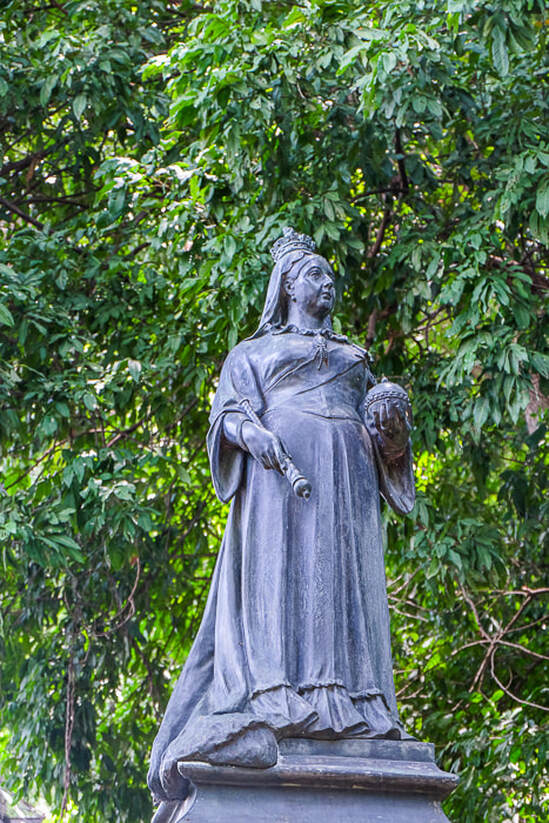 While in the cemetery, you might hear the thwack of golf balls or the plop of tennis balls in the adjacent Gymkhana Club, the final stop on this tour. Turn right out of the cemetery, then right again to the club’s entrance and go through to the terrace to enjoy a sweeping view of the golf course and cricket pitch from the shade of an enormous rain tree.

The massive rain tree at the Gymkhana Club
The club features large in Teak Lord – in chapter 38 (Birth of a colonial club), chapter 43 (Rumpus under the rain tree), chapter 52 (New laws, new taxes), and the first scene of chapter 56 (Victoria in Lanna).

No doubt the teak foresters whiled away many an hour in this delightful spot, sipping on gin and tonics or imported ales. If you have made it this far on our historic journey, treat yourself to a club sandwich and cocktail, flick through your copy of Teak Lord (or buy one here; on sale in the golf shop) to check references, then slip into daydreams of elephants dragging huge teak trunks through the forest to the river’s edge. 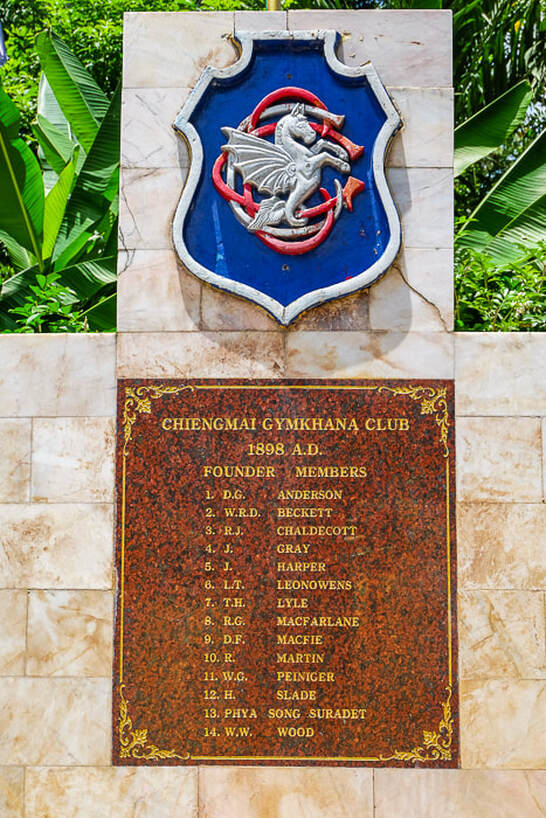