Ron excels at nature photography, and to give these images a platform he sometimes writes stories about fascinating natural phenomena, such as the bizarre baobab tree.

Though they rarely exceed 20 metres in height, it is not unusual for the circumference of their trunks to be as much or more: it can often take more than ten people with outstretched arms to circle one tree. They have no branches on the lower part of their smooth, silvery trunks, making them difficult to climb. Instead a spray of twisted boughs sprouts from the top of the trunk, looking like the unkempt hair of a cartoon character.

Baobabs belong to the genus Adansonia and the family Bombacaceae. There are eight different species in the world, of which six can be found in Madagascar. Three of the most common species grow on the west coast of the island: the fony, the grandidieri, and the za. These names are derived from their physical characteristics, which are bottle shaped, flat-topped or upside-down respectively. The fony is indeed shaped like a bottle with straight sides tapering at the top. The grandieri, which is usually larger than the fony, spreads its branches at an even height. The za, perhaps the most bizarre of all, looks to all intents and purposes like a tree that has grown upside-down with its roots wriggling about in the air.

The secret of the baobab’s success in surviving in harsh environments and the reason for its massive trunk is that it has little wood fibre but a large water storage capacity. Each tree can hold up to 300 litres of water, enabling it to live through long periods without rain. Their life-cycle is as impressive as their bulk – most live over 500 years and some specimens in Africa are believed to be up to 5000 years old.

Since most baobabs grow in isolation and are susceptible to strong winds, they have deep-penetrating roots that allow them to withstand even the wrath of cyclones. They produce leaves for only a short time during the rainy season, when they also develop huge pink or white flowers. The trees are pollinated by bats and have a fruit as unique as the tree itself. It has a furry coating around a tough, gourd-like shell that shields a soft pulp inside called ‘monkey bread’ and seeds that are rich in citric acid and oil. The shape of the fruit may be round or oval, giving it the appearance of a leftover decoration on an abandoned Christmas tree. Yet this fruit is so desirable that Madagascan villagers often punch holes in the tree trunk to climb up to them if the tree is too tall for the fruit to be knocked off from the ground. 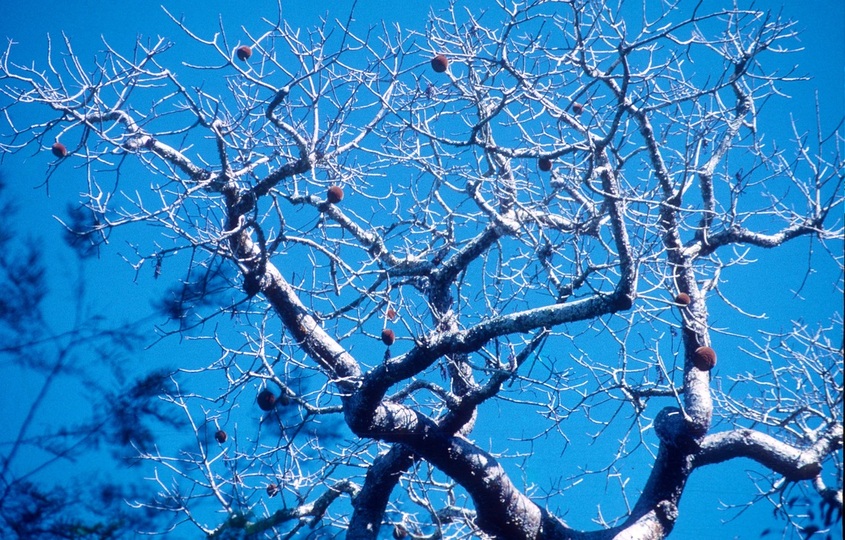 The fruit of a baobab looks like a leftover Christmas decoration
As with most trees, the baobab is exploited by man. Apart from consuming its nutritious fruit, people use its leaves for medicine and its bark for cloth and rope. While the wood is too soft for building houses or furniture, it can be used to make paper. The hollowed-out trunks of dead trees have also been used as prisons, toilets and even as tombs. In some parts of Africa, people believe that poets and musicians are possessed by the devil, and that their bodies will pollute the earth if given a normal burial. Thus they are consigned to the bowels of a baobab.

The importance and uniqueness of baobabs to the communities living in barren areas has guaranteed them a major role in the world of myths and legends. Just outside Morondava, on the west coast of Madagascar, an enormous specimen called ‘the sacred baobab’ is believed to have sprouted on the exact spot where a princess died about 800 years ago. It is now surrounded by dense growth and only its crown is visible above the thicket.
A little further up the coast, two baobabs nicknamed ‘the lovers’ are entwined around each other in an embrace that has lasted over 600 years. However, the most popular place for baobab spotters is ‘Baobab Alley’, twenty bumpy kilometres north of Morondava. Baobabs are usually solitary beings, standing tall and proud in the midst of empty spaces. Yet in Baobab Alley, they cluster together forming an avenue of towering columns that border the dirt road, their tortured and twisted tops reflected in the lily-covered pond at the roadside.

The best time to visit these gentle giants is at twilight, when their stark silhouettes form a spectacular contrast to the soft, calming colours of sunset. As the colour fades and lens covers are replaced on cameras, a small group of admirers shuffle reverently away, speaking in hushed tones about this mute yet extremely expressive form of life.