In ways, we are all searching for Shangri-La in the sense of looking for a better life, or somewhere better to live it. This collection of stories recounts a few steps of Ron's path on this endless journey, and below is a sample story to whet readers' appetites. This story will occasionally change, but to read the entire collection, you'll need to buy it online at Kindle or Create Space. To listen to Ron reading this story, click on the play button on the audio player below. 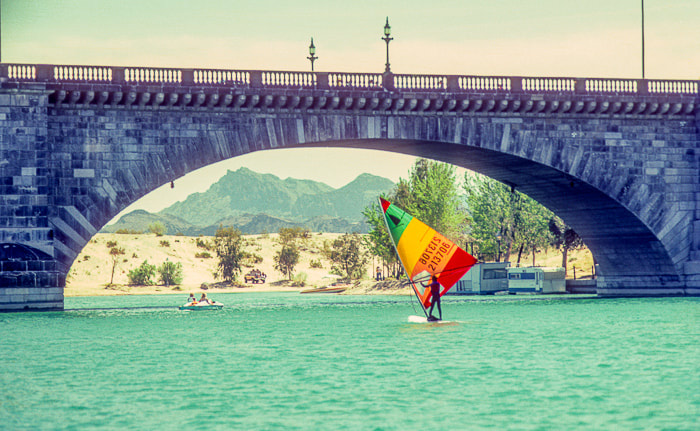 Windsurfing under London Bridge in Arizona.
​The sign materialized like a mirage from the heat haze of the Mohave Desert. 'London Bridge' it stated, as innocently as if it were 'Joe's Diner'. Something was not quite right, and my foot reacted by easing off the throttle. My mind was drowsy after hours of straight driving through the featureless desert, and I struggled to identify my unease. Without any conscious decision, I found myself veering up the exit ramp and pulling up to the curb.

I was on a ten-day exploration of the western US, on that day going from Los Angeles to the Grand Canyon. It was my kind of tour—a loose itinerary, every element of the already vague plan open to change. I hadn't noticed London Bridge marked on the map, but sure enough there it was, about twenty miles south on Highway 95, at the entrance to Lake Haversu City. So I set off towards it through the barren Arizona landscape, smiling to think of the strange things that some people do, like moving bridges from one side of the world to the other.

It must have been in the sixties when the news broke in England that some rich American had bought it. Rumour had it he mistook it for Tower Bridge with its cantilevered drawbridges and awe-inspiring twin towers. London Bridge was not at all distinctive, apart perhaps from the seas of commuters swarming over it each morning and evening in and out of the City of London. In any case, by the time I started work as a bus driver for London Transport in the early seventies, they had already begun dismantling the bridge slab by slab.

I'll never forget my first day. It's a tradition on the buses to give new drivers the first bus out of the garage, perhaps in the hope of cutting down on crashes. So there I was at four in the morning in my new-smelling uniform, driving number 47 from Catford to Shoreditch by way of London Bridge. It was raining, an endless English drizzle smearing the windscreen. All our lights were blazing and Thomas, my Jamaican conductor, was sprawled across the back seat, reaching up occasionally to give three rings on the bell—the all-clear to sail past a bus stop if no one is getting off or on.

I didn't expect much custom at that time of day, but by the time we got to Deptford Broadway I was stopping regularly for groups of women in headscarves huddled up together against the rain. Soon the bus was full, downstairs and up, and I could hear the thump of Thomas' feet as he pounded up and down collecting fares. I was on my feet most of the time too, to haul eight tons of metal with sixty hefty passengers round corners, and to literally stand on the brakes at bus stops and traffic lights. Now I was getting three rings to tell me to pass stops where damp figures waved in vain, since no one was getting off.

I worked out that my passengers must be charladies - office cleaners heading for the City to make everything spick and span for the wheelers and dealers who made their fortunes there. As we sloshed through the streets of Rotherhithe, I experienced one of those rare moments of satisfaction to be doing something worthwhile with my life, while all my lazy friends were snoring in bed. We approached London Bridge Station, on the south side of the River Thames, from where an early trickle of dark-suited people emerged purposefully towards the bridge.

I don't remember seeing any workers on the bridge that morning, but I do remember the sense of terror as I approached it. The rain had graduated from a drizzle to a downpour, and a stream flowed down the planks that led on to a narrow scaffold above the bridge, barely a few inches wider than the bus. The cab was all steamed up and I leaned over the huge steering wheel to wipe a peephole clear. I nudged the bus on to the ramp, the huge wheels skidding on the slimy surface, and gasped with relief once we were on the level. But still in front of me lay the equivalent of a tightrope walk for a bus. The boards sank ominously beneath the weight of my charladies as we bounced forward through the mist. I glanced down at the river, and almost fainted at the sight of its rain-pitted surface.

When we slithered off the north end of the ramp, my sense of relief was enormous. The charladies dutifully descended at their appointed stops and vanished into glass doorways, Thomas returned to slouch on the back seat and soon at the Shoreditch bus depot I was clutching a steaming mug of tea to steady my nerves ready for the return journey.

Over the coming months I developed a strange fascination for the gradually disappearing bridge. It seemed somehow a key to London's mystery, linking as it did the totally different worlds of North and South London - the North with its glitz and glamour, the South an endless maze of drab suburban streets. The history books went a long way to explaining this difference. London Bridge was in fact the only bridge over the Thames in the city until 1740, when Westminster Bridge was built. From 1209 until 1832, a narrow-spanned bridge supported a chapel and several houses, probably a prime location even in those days. The dark granite bridge of only five spans which replaced it had witnessed London from Dickensian days to the Swinging Sixties. I wondered what it would make of Arizona.

There was no sign of life in that wasteland of Western Arizona - no people, no trees, nothing. Then suddenly as I drove over a slight incline, there it was. The bridge, bleached in the noonday glare, led over the turquoise waters of the Colorado River into Lake Haversu City. At the approach to the bridge stood an unashamed tourist trap—a chipboard 'English Village'. A few blackened plywood planks gave a 'Tudor' feel, and the shops selling souvenirs all had 'olde worlde' names: 'Ye Ole Copper Shoppe', 'London Bridge Candles' and 'Ye Hog in Armour', the 'village pub'. A sky of a blue deeper than any ever seen in London pressed down on the rooftops, and a thermometer registered over 90 Fahrenheit.

The whole place had a holiday camp atmosphere. Windsurfers and speedboats zipped playfully through the spans of the bridge. The arches framed a classic desert perspective - dusty plains and dry hills. Tourists wandered about in small clusters, clearly fascinated by the curious representations of the 'Olde Worlde'. A towpath with gas lamps lit despite the fierce midday sun wound out towards the wilderness.

A bright-red phone box and post box awoke in me nostalgia for my homeland, but round the corner awaited a bigger shock. Sitting in a neatly trimmed garden, gleaming red and black, was a London bus. Not quite a 47, in fact a 77c, which according to its legend should be somewhere between Euston and Vauxhall. Now it sat looking lost on the banks of the Colorado. A poster revealed the awful truth that this great beast of London's streets was making its living as an ice cream parlour. But then I thought, perhaps it's happier here, earning pots of money with very little fuss. No more "Hold tight, please," "Fares please" or constantly ringing bells.

Slurping a strawberry sundae in the shadow of the bus, I pondered the fate of the bridge and myself. Things seemed to have worked out pretty well for both of us. My bus-driving days were long gone; I had saved enough teaching English in South America to finance myself on a postgraduate writing course in San Francisco. As for the bridge, compared to its previous location the new home must seem like a kind of heaven; out of the rat race and shivering climes into a world of sunglasses and shorts.

I finished my sundae, got in the car and drove across the bridge for old time's sake. No problem this time—no rain, no ramps, no mass of humanity whose lives depended on me. Once over, I spun a one-finger turn, kicked the gas and hit out for the Grand Canyon.