Ron is a great believer in the dhamma and occasionally writes stories on aspects of Buddhism that can confuse Westerners. In Mindful Moments he explains how visitors to Thai temples can enter meditative states.

Of course the ultimate aim of meditators is somewhat loftier - the transcendence of desire and suffering in a state called 'nirvana'. Serious students of meditation contemplate the four foundations of mindfulness. The first of these is the body, which is why the first step in meditation is always to be aware of the rising and falling of the breath, along with other bodily sensations, such as itching, aching or stiffness. Walking meditation can be easier for restless people, since it focuses the mind on the movements of legs and feet as well as breathing. For most beginners, the 'monkey mind' refuses to be controlled, and constantly slips away from the task in hand like a fish through grasping fingers.
The next step is to watch our emotions as they appear and disappear, rather than being swept along by them. Here things start to get tricky, since so many of us are driven in virtually all our actions by our emotions, as we strive constantly to encounter pleasant sensations and to avoid painful ones. Such striving is a constant drain on our energy, in contrast to the placid state of equanimity aspired to by meditators, which adds to rather than subtracts from our strength.

The third level of contemplation is the mind. If we can generate a detachment from our mental processes, we may experience 'sati', a Pali word which means mindfulness, or reflective awareness. The fourth foundation is 'dhamma', or truth. With a clear, unbiased mind, we can look out at the world and see things 'as they are', without the positive and negative values we usually ascribe to everything.

'Nirvana' is an elusive state, even for those who dedicate their lives to its pursuit. But all of us are capable of mindful moments - fleeting instants when we feel wide awake, physically balanced, emotionally calm and mentally attentive (the word 'Buddha' in fact comes from the sanskrit word 'buddh', meaning to wake up). In such a mental state we can learn a lot by simply opening our eyes and seeing the 'dhamma', or truth, in the world about us. And the compounds of Thai temples are full of sights from which we can learn about the world through contemplation.
The steep sloping roofs of temples, often in multiple layers, are designed thus to keep the interiors cool, and the eaves are usually decorated with 'nagas', serpent-like creatures which act as guardians. Frequently made of reflective glass mosaics, they look both fearsome and beautiful when caught by the sun's rays. Nagas also flank steps leading up to the temple doors. The doors and windows themselves are often carved with characters performing a 'wai' (gesture of respect), or with designs featuring the 'kanok', a swirling flame-shaped pattern found throughout Thailand.


Cone-shaped 'chedi' or stupas are often the most striking element of a temple compound. Smothered in copper or bronze plate or a fresh coat of whitewash, such structures hold the ashes of revered monks, and are usually built right next to the 'viharn' or assembly hall. If a festival is in progress, the compounds may also be graced by 'thoong', richly decorated prayer flags, several metres long, that sway in any breeze. Some temple compounds, such as Wat Umong in Chiang Mai, tack pertinent verses of the Dhammapada (the Buddhist 'bible') on to trees in Thai and English, so that a wander round the grounds also involves philosophical contemplation.
Images of the Buddha, usually made of brass, adorn the interior of the assembly hall. Needless to say, great care goes into the construction of these images, so much so that sometimes the artist is able to directly calm the viewer through the blissful expression on the Buddha's face. For devotees, however, the position of the Buddha's hands communicates as much as his look, conveying blessing, teaching and the struggle to resist the desires of the senses. As well as statues, temples often contain painted scenes from the life of Buddha or allegoric images indicating the results of good or bad actions.

As with every sphere of life, however, it is people themselves who affect us more strongly than their artifacts. Thai monks, with their simple saffron robes, bare feet, shaved heads and eyebrows seem to epitomise the spiritual life and make a stark contrast to the increasingly material surroundings of modern Thailand, where fashion and wealth still hold sway on the city streets. With their simple routines, the monks have no need for money or material objects. In fact, during the 'rains retreat' from July to October, monks do not even go outside the temple unnecessarily, dedicating themselves to meditation practice and study of the Buddhist sutras.
While most city people’s actions are guided by money,  the rhythm of life in the countryside still revolves around the temple, which is usually found in the heart of a rural village. Unlike Christianity's Sunday and Islam's Friday, Buddhism has no 'special day' for worship and 'Buddha Day' is on a different day each week. On whatever day it falls, lay people visit the temple to make offerings and reaffirm their intention to keep the 'five precepts' of the faith - no killing, no stealing, no lying, no intoxication or indulgence in the senses.

They show their faith actively by 'making merit', or doing good deeds. One of Thailand's most unique sights is that of lay people on their knees, giving thanks to monks for allowing them to offer food on the early morning alms round. In materialist societies, it is always the receiver who gives thanks for a present and the giver who accepts thanks, humbly or otherwise. It is indeed strange to see these roles reversed in this touching interaction.
Another form of merit making is to offer lotus flowers, candles and incense, all highly symbolic objects, to Buddha images in a temple. The lotus flower grows up out of the mud to form exquisite blooms, showing us that it is possible to transcend impure origins; the flame which flickers atop a candle symbolizes the Enlightenment or Awakening that Buddhists aspire to; and the fragrance of incense represents the virtue which should pervade our actions. Such offerings are common at Buddhist festivals. Another form of merit making is to show compassion for all living things. A common example of this is when people buy caged sparrows, sometimes on sale in temple compounds, and release them into the air.

Many visitors feel uplifted on leaving a Thai temple, particularly if they walk around at their own pace, attentive to the symbolism of what they see, and open to the lessons there are to learn. Some may find it difficult to rationalize this sense of piety, but the explanation is not so hard to find; when people act out of mindfulness and humility rather than selfishness and greed, the weighty problems of the world seem to simply melt away, and this planet becomes a delightful place to be. 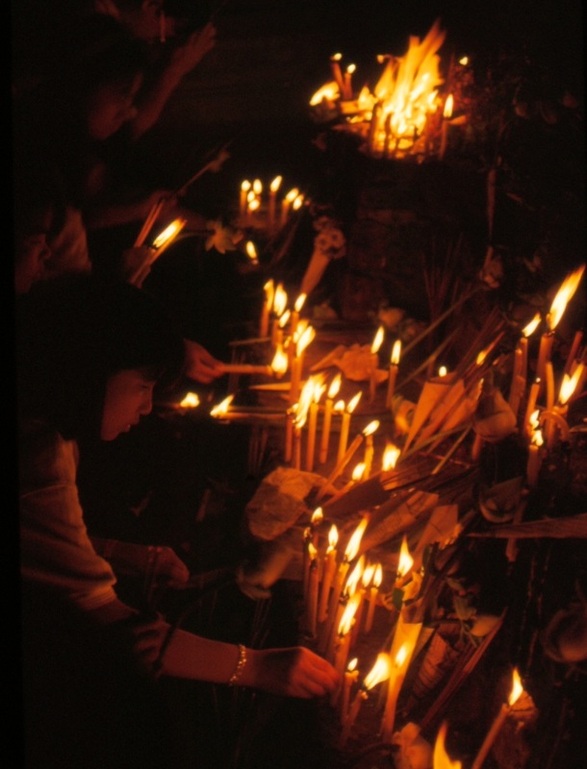 Candle offerings at a Buddhist festival